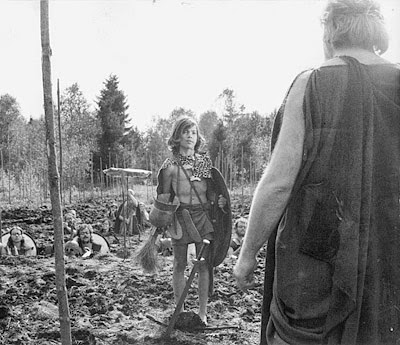 German made-for-television interpretation of the Greek myths, with a cast comprised almost entirely of children.


The film is set in a time when mankind was still in a state of childhood (and children were viewed as people). Everyone had just one aim: the Golden Thing.
The 11-year-old Jason goes searching for treasure on his ship, the Argo, along with Hercules, Castor, Pollux, Orpheus and a crew of other Greek princes. Their first stop is the island Dolionen, whose accidentally kill. After this catastrophe the Argonauts reach the island Lemnos, where only women live. They discover the secret of the island and its inhabitants. Then they come to the Symplegaden, two floating cliffs which mark the entry to straits with constantly changing tides. With intelligence and inventiveness they negotiate the passage. reach the mythical land of . Medea, the powerful daughter of the king, falls in love with Jason and helps him in his fight for the Golden Fleece. The Argonauts flee across the sea with the furious people of in hot pursuit behind.
In contrast to the traditional saga the Argonauts don't overcome their dangers through their heroic courage or help from the Gods. They survive by virtue of their good sense. Divine powers are explained logically away and the Argonauts reach their goal because they have used the natural intelligence they have, rather than leaving it up to the Gods.